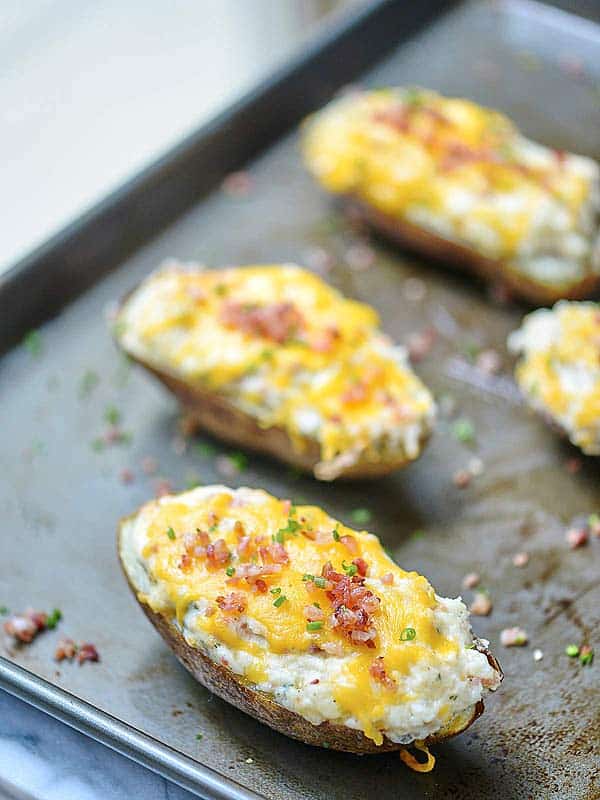 Well. I did it. I brought back one of my most favorite treats: the jalapeno popper – and kicked it up a notch by stuffing it into a potato. These are Jalapeno Popper Twice Baked Potatoes and I love them. 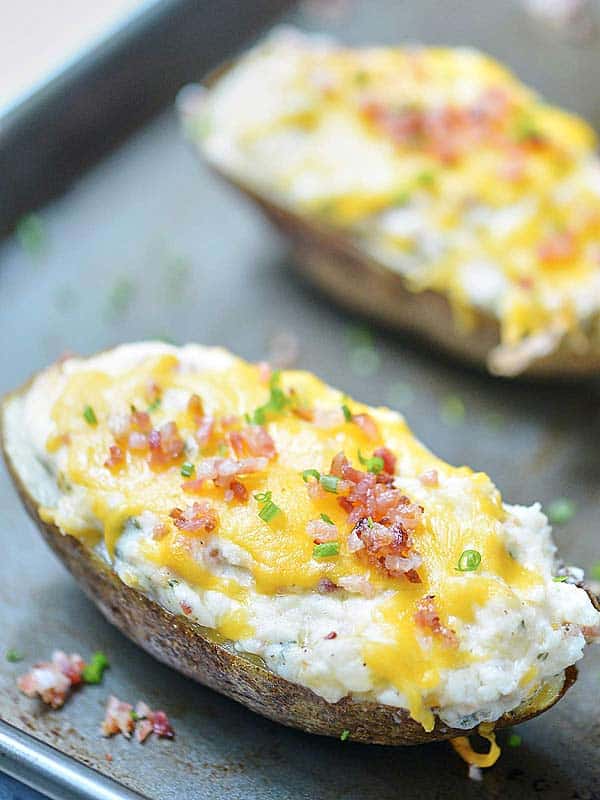 Growing up, after dance class sometimes my dad and I would stop by Wendy’s. The ONLY thing I would ever get there was a cheesy potato. Just potato and melty cheese. Yum.

Being a sophisticated adult now 😉 , but still secretly craving those Wendy’s baked potatoes, I decided to forgo the drive through, because oh yea, we don’t have a car, and make some cheesy potatoes at home instead!

But then I reeeeally started craving some jalapeno poppers.

Amazing – because they taste so good.

Dangerous – because they taste too good. 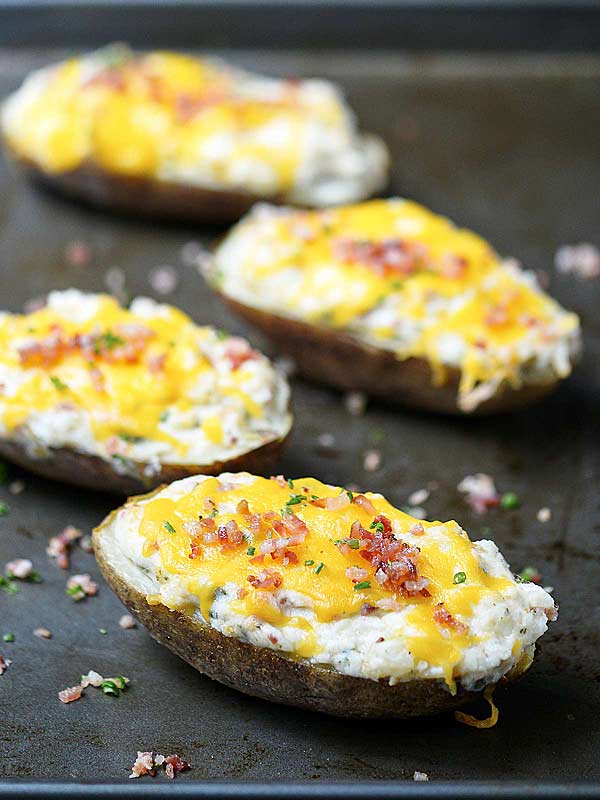 Thank goodness we’re friends with our neighbors, because I pawned a few of these jalapeno popper twice baked potatoes (and these lemon bars) off on them. I don’t think they complained too much, because after dinner that night I received a text saying, “Omg. I hate you and love you at the same time. Amazing treats!!”

Trevor and I enjoyed a few too many of these while watching our new favorite show on Netflix, Bloodline. Ohhh my gosh. Have you guys seen it? It’s seriously addicting. I won’t lie to you and say we didn’t binge watch the whole season in only a few days. I won’t do it. 😉

But back to the jalapeno popper twice baked potatoes. 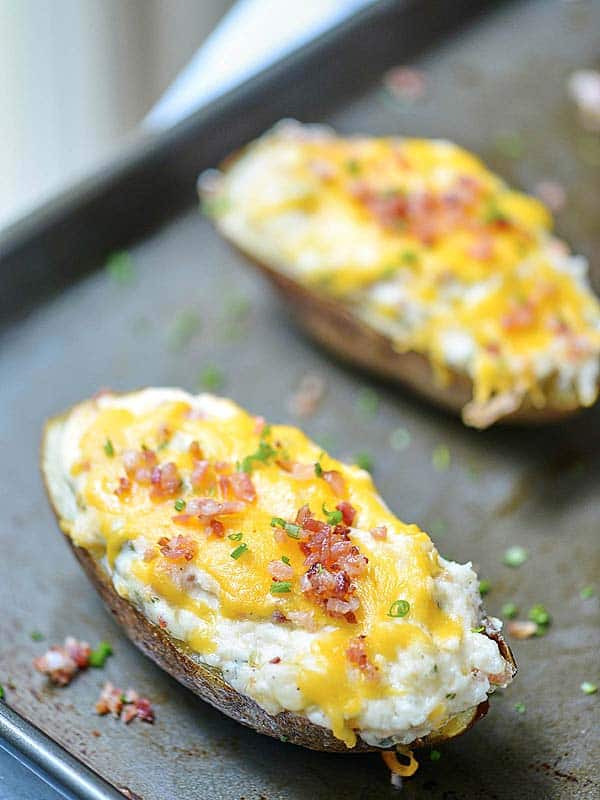 The potatoes are baked twice (really Jennifer? 😉 ), so the skin gets crispy and the inside gets nice and fluffy. The first time the potato gets baked whole. Once it’s fork tender, I scooped out the inside and whipped it with roasted jalapenos, cream cheese, cheddar cheese, crispy bacon… you know… all your favorite jalapeno popper ingredients and then re-stuffed the filling back into the skin. Then the potato got a generous topping of cheese and baked for the second time. 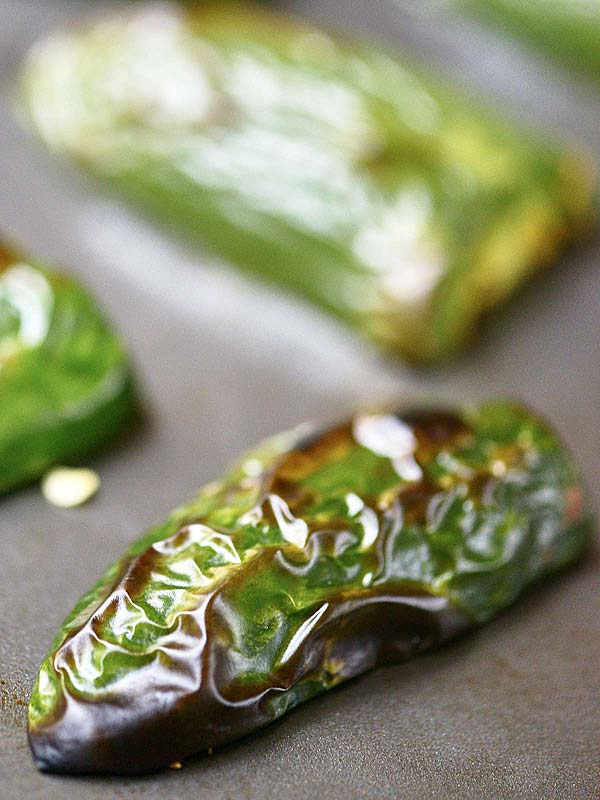 Once the potatoes were warm, I took them out of the oven and sprinkled them with a little more bacon, because, well, why wouldn’t I? 🙂

I saved a few for Trevor and I and then immediately sent the rest away, so I wouldn’t eat them all in one sitting. 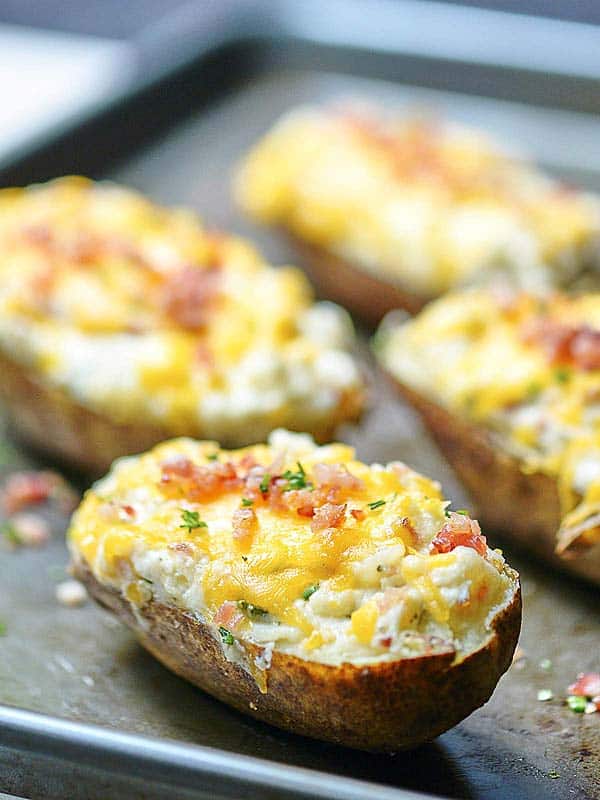 I mean, I wouldn’t blame myself if I did, the filling is that ridiculously delicious. It’s tastes just like a jalapeno popper, but better, because we stuffed it into a potato!

What are some of your favorite food mash ups? Jalapeno poppers + twice baked potatoes is my new fav…obvi. 😉 Show me the yummy! 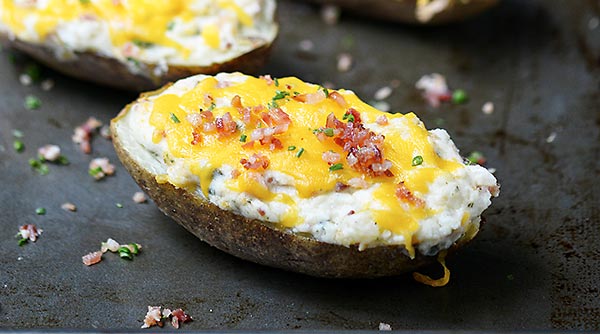 Rate This Recipe
STORING
Room Temp:N/A
Refrigerator:3-5 Days
Freezer:N/A
Reheat:Bake or microwave to reheat
*Storage times may vary based on temperature and conditions

*Not sure how to cook bacon? Place bacon in a cold pan. Turn heat to medium. Cook until crispy! Once cooked, place on a paper towel to soak up extra grease! **Jalapeno peppers can vary in spice level. I used 1 whole jalapeno and 1 whole jalapeno that was deseeded/deveined and thought the spice level was perfect. I tell you to roast 4 just in case you want to add more. Start with less (maybe 1 pepper deseeded/deveined) and add more as you see fit! If your potatoes aren't staying upright after you've scooped the the filling, cut off a bit of the bottom so it's flat. 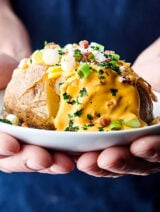 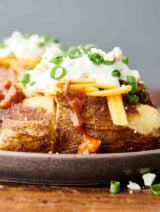 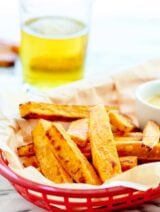 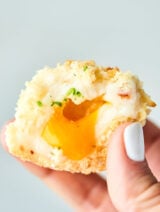 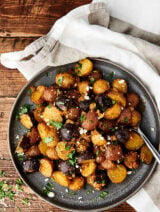 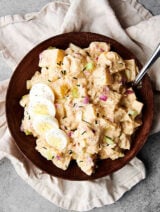