This Spicy Tuna Roll Bowl is a deconstructed version of the spicy tuna roll. Protein packed tuna, brown rice, and veggies all smothered in the most magically spicy mayo sauce. This bowl is *almost* too good to be true! 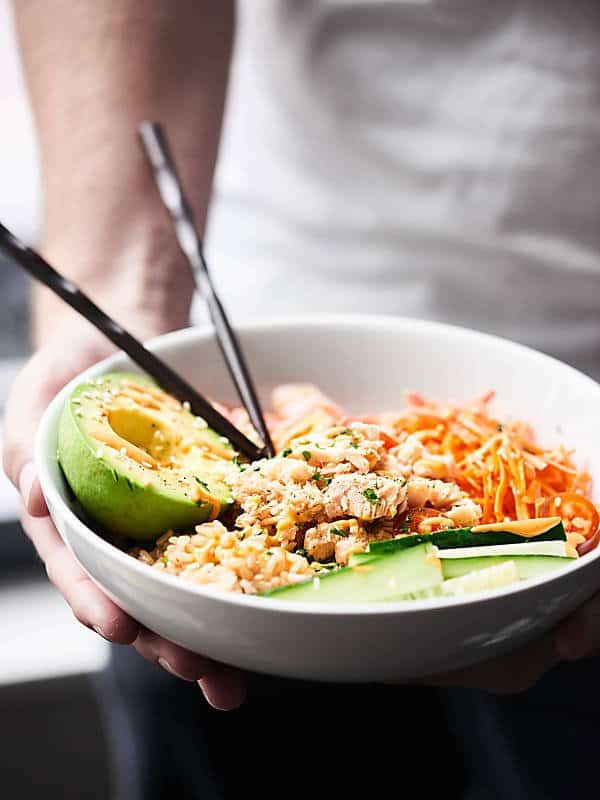 Thanks to Chicken of the Sea® for sponsoring today’s post. They always help us eat protein packed, healthy meals in a hurry!

“This is might be the best thing I’ve eaten in a while.” – quote from Trevor Debth about this Spicy Tuna Roll Bowl Recipe. 🙌 😉

I love it when that happens.

Trevor typically likes most of the food I make, but it’s a special victory when he states something is the BEST thing he’s eaten in a while.

Because of this, we’ve now had these bowls approximately every single night this week. 😉

This Spicy Tuna Roll Bowl is a deconstructed version of everyone’s fave sushi – the spicy tuna roll. Complete with the magic spicy mayo sauce we all ♡, protein packed tuna, brown rice, and veggies – this bowl is *almost* too good to be true! 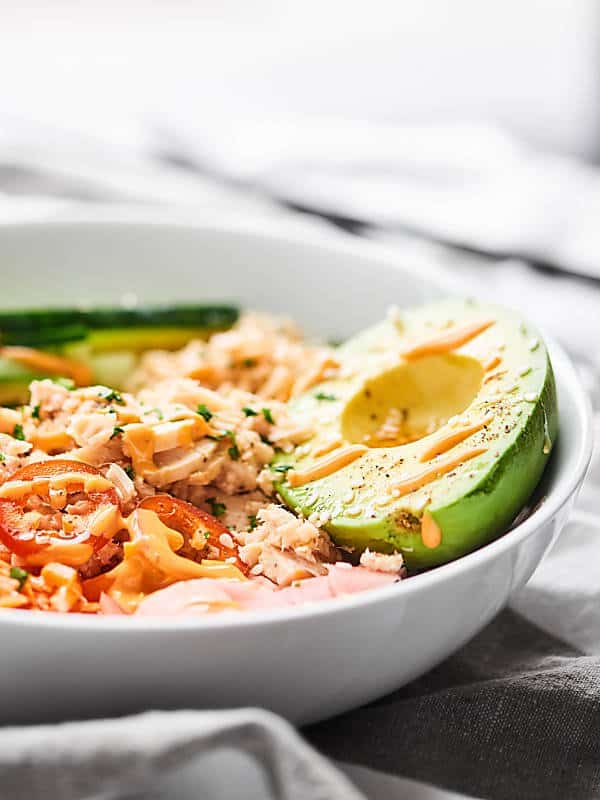 Reasons why this Spicy Tuna Roll Bowl > the “real” roll:

Wanna hear something super cool? To celebrate the new EZ-Open Can packaging, Chicken of the Sea is hosting what they’re calling the “Pull It Off Game”, which features a virtual “kitchen” setting in an online game. YOU can try to grab a Chicken of the Sea can as it revolves on a Lazy Susan Table which gives YOU a chance to win $25,000 worth of instant prizes! All you have to do is play the game and grab the correct EZ-Open can. 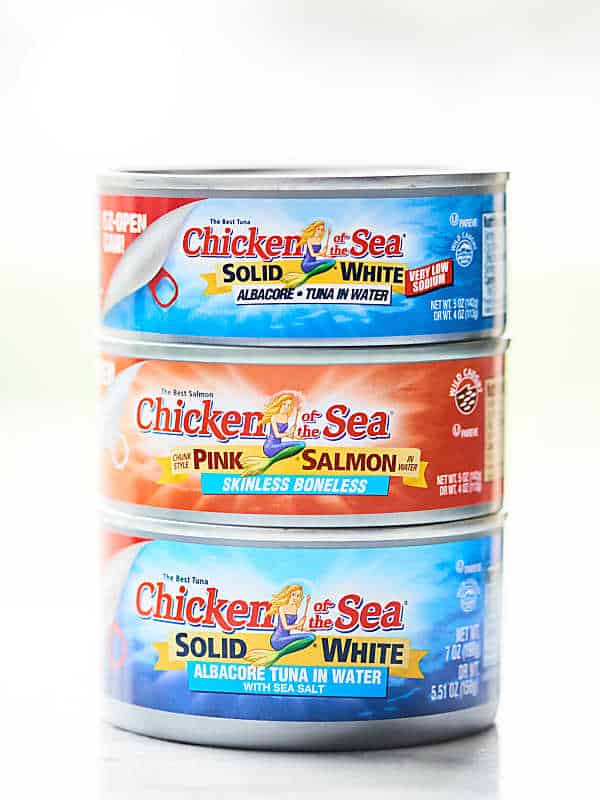 Wanna play? Head to Chicken of the Sea’s Facebook page between now and November 12.

For real though, I played and I totally I lost, but you better believe I’m going to play again, because it’s kind of addicting. 😉

But now. Let’s talk bowls, because I don’t know about you, but I.Am.Hungry!

Let me walk you through just how darn easy this recipe actually is.

There are only two parts:

You guys. This sauce is simple, but it’s literally mind blowing delicious. I  eat it straight off the spoon.

In a bowl, you’re going to combine brown rice, an EZ-Open Can of Chicken of the Sea Solid White Albacore in Water, sliced cucumber, shredded carrots, avocado, sesame seeds, jalapeños, maybe a little ginger if you’re feeling zesty, and whatever else your little heart desires.

Then, you’re going to

Just smother it on. 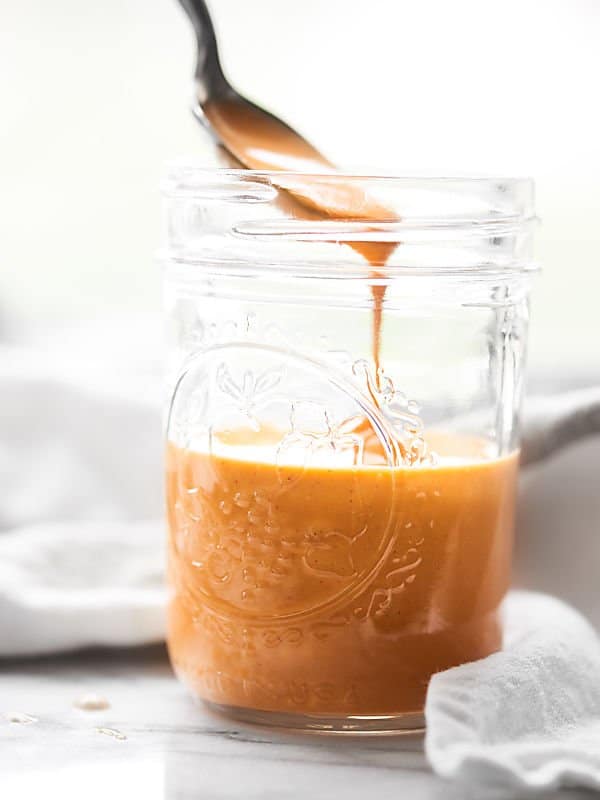 Please, don’t be shy, because it’s so darn delicious.

After that, you might need a little sprinkle of salt, a little drizzle of sesame oil, again, don’t be shy, load up the bowl!

Then, you’re going to devour it all in 2.5 seconds and be amazed that you just ate a really delicious, pretty darn healthy, protein packed, super impressive, but actually crazy simple, tastes like the real deal: Spicy Tuna Roll Bowl. 😉

Make one for dinner tonight, or make a bunch for all your lunches next week.

It’s totally up to you! 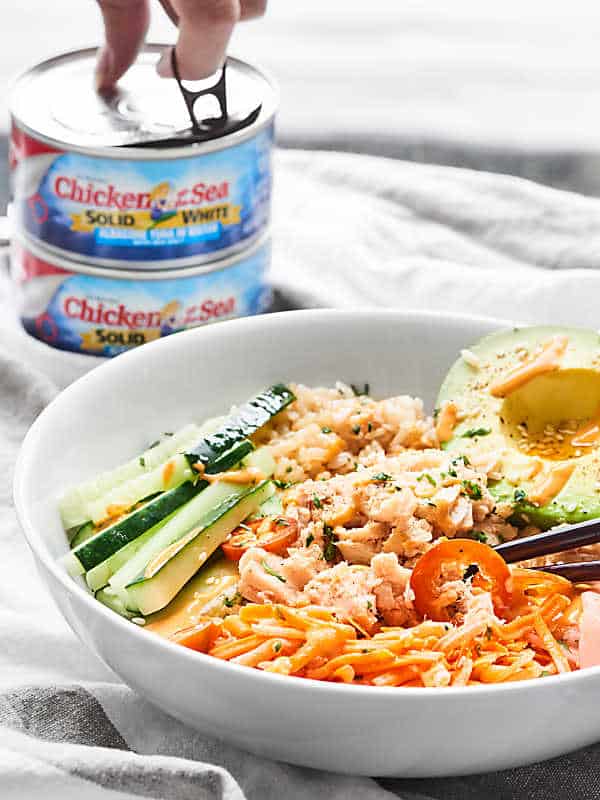 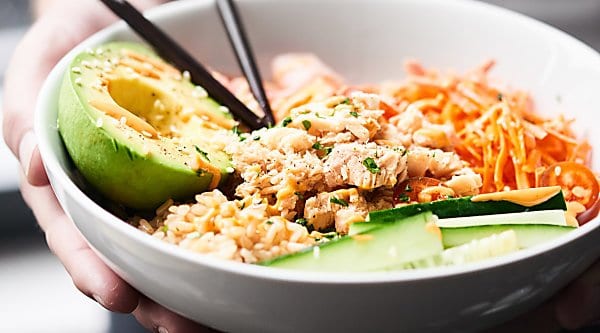 *Makes enough for 2-4 bowls depending on how much sauce you like. 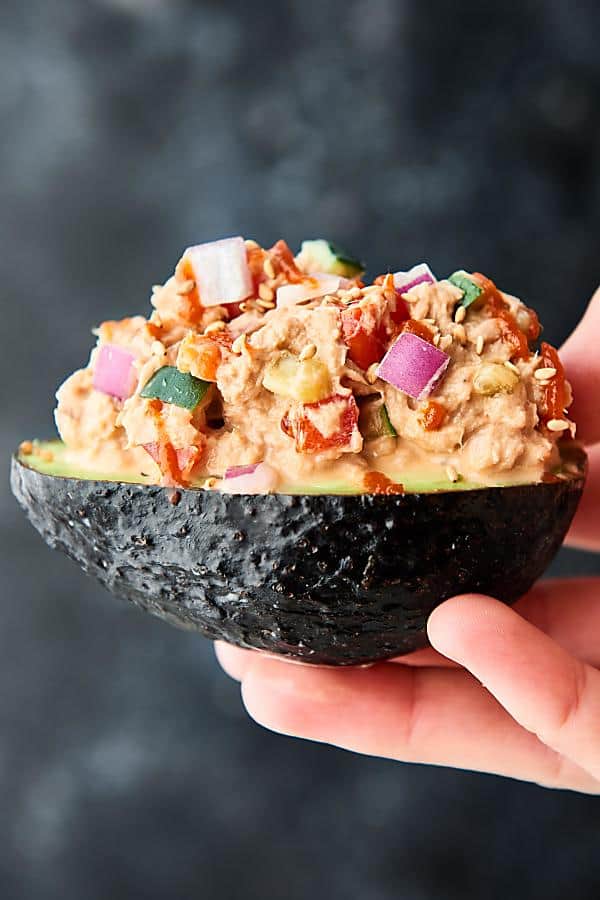 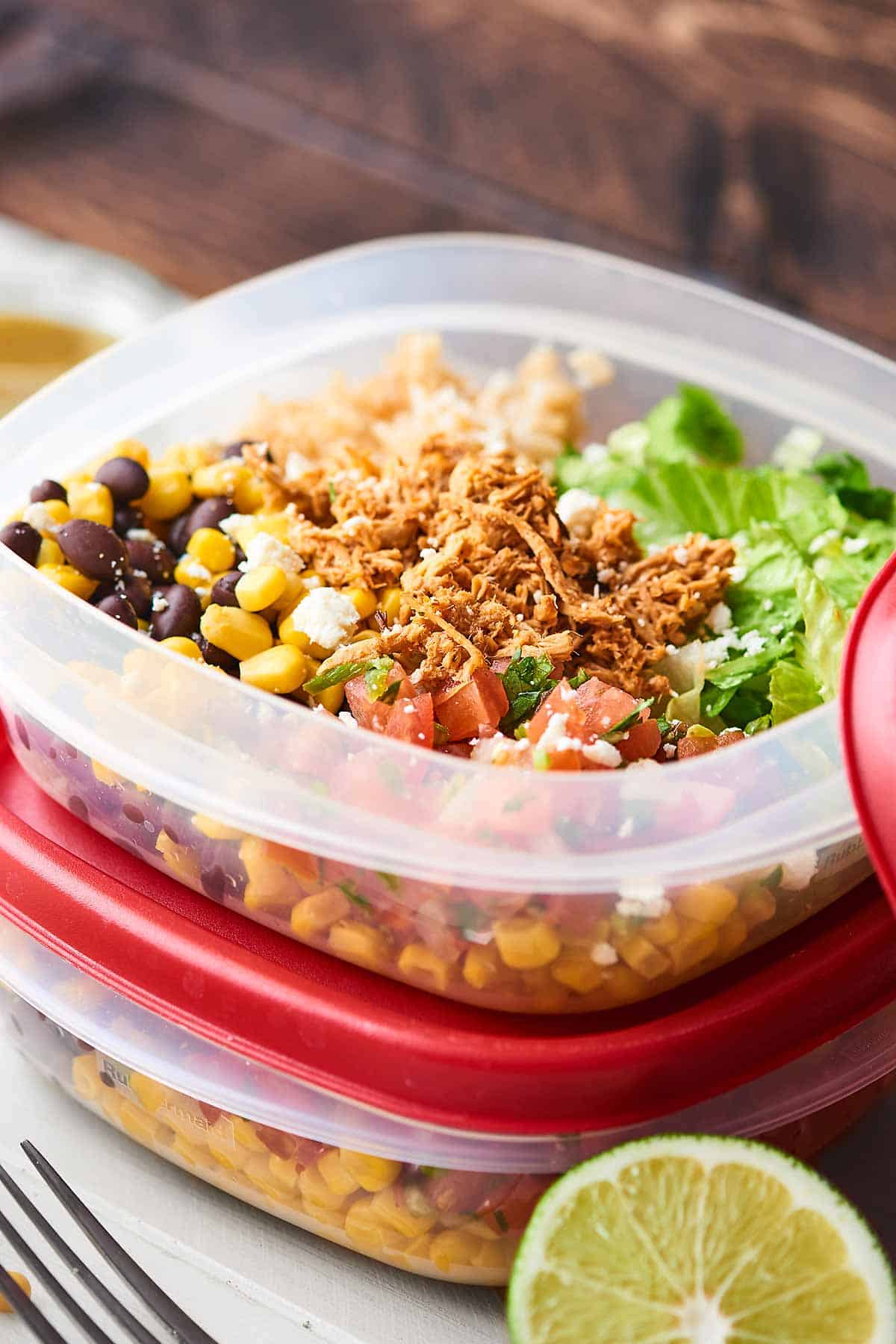 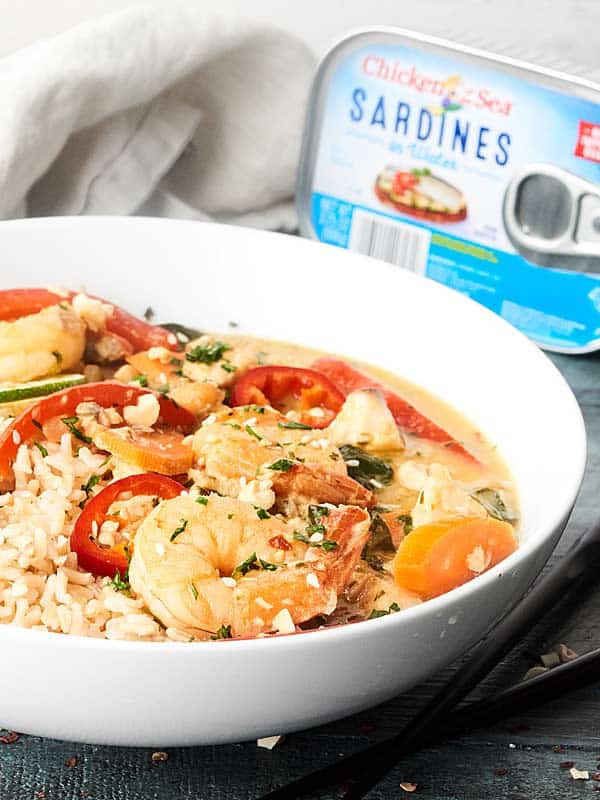 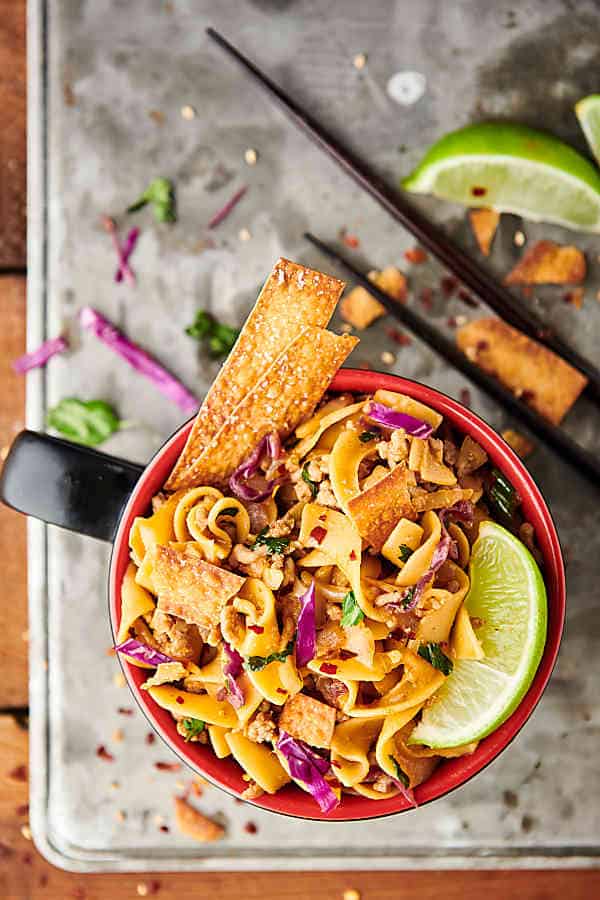 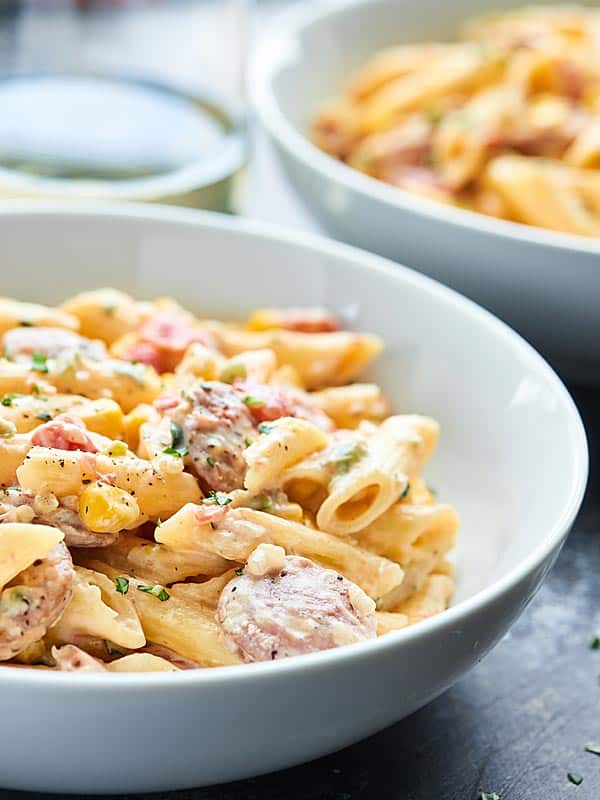 Thanks again to Chicken of the Sea® for sponsoring today’s post! All thoughts and opinions are our own.