One Pan Pork and Vegetables Recipe

One Pan Pork and Vegetables Recipe

Trevor here, dropping by with our December 2016 Income report! The holidays got me WAY behind, so I’m dropping both the November AND December income reports at the same time.

I talk all about setting the bar and updating to our new recipe plugin in the November Income Report, so be sure to check that out too!

Bring on the income report!

Here at Show Me the Yummy, one thing we embrace is transparency. We want to show people how the business side of blogging works and that it’s absolutely possible to make an income doing something you love and to work on your own terms. Don’t worry, the food will return tomorrow.

Here’s a brief introduction to these traffic and income reports…

You can stop by our about us page, to get the whole story, but in short Jennifer and I started this blog November 2014 with the hopes of it earning an income for Jennifer. Well… a lot has happened since… I quit my job eight months in and now after two years, we’ve managed to grow this blog into our full-time incomes.

That probably never would have happened without income reports like these that showed us that it’s possible and that gave us the courage to take the leap.

Our hope is that, for those interested, these reports can help to show what worked for us, the mistakes we made and that it is possible to make an income online doing something that you love if you work hard and stick with it.

None of these reports, on their own, tell the whole story. As time passes they can make things seem out of reach (especially if you’re just starting out), but they aren’t at all. Think of each one as a chapter in a book that continues to be written. To get the full picture and to see how things have grown over time, I highly encourage looking at our traffic and income reports page where you can click into individual reports, like this one, to see the slow steady growth from our first month where we made $28.

Okay, enough with the backstory, let’s get on to the report…

In October’s income report I talked about the importance of diversification of your business so you’re not too reliant on one source of income. I want to expand on that this month talking about something else I’m a huge fan of and that’s scaleability.

Our hands-on SMTY Food Video Workshops added a really great new way for us to diversify our income, but because they physically take about 3 1/2 days after all is said and done to put on, they’re not very scaleable. What I mean by that is we can’t do four workshops a month, we’d burn out. It would also be difficult to find that many people each month to travel, invest $1700-$2000 after travel expenses to attend etc.

We needed something scaleable, which took form as the SMTY Digital Food Video Workshop. It’s a digital product that launched January 18th! I’m going to do a deep dive on what that launch looked like in next month’s income report… but I wanted to touch on the launch line item you see in the income this month.

With the launch of this new product, we wanted to provide a HUGE value for people who pre-ordered it to get sales moving and get the word out. To do that we opened the first two weeks of Pre-Orders in December at $200 off. The response was amazing and in just two weeks we already had nearly $20k in pre-sales!

I’m going to go into a ton of more detail next month, but that’s what helped to push revenues this month to nearly $50k which was an amazing way to round out the year!

Let’s get on to our end of year recap!

Here are the detailed social stats for December from The Blog Village Social Stats Dashboard:

Traffic grew 125% to nearly 4 million sessions, in 2016 which we’re thrilled about. We fell a little short on one of our goals below but overall we can’t be anything but ecstatic about how the year turned out.

It’s so easy on these month to month reports to always see the big picture, so here’s the entire life of the blog up to this point…

I think this graph shows it best. No magic.  No super-viral jump. No secret trick to getting tons of traffic. Just slow, steady growth over the last two years with a line (if you average out the holiday bump and summer slump) moving slowly upward 🙂

I’ll be honest, Jennifer was really freaked out when we set our goals last January (because she doesn’t like to miss goals) but I think it’s better to fall a little short on a big goal than to set a goal that’s easy. So here were our goals and results:

This one really exceeded our expectations. Our total income for SMTY with workshops and the pre-orders for the Digital Workshop rang in at $155,620! If you look at the blog alone without any of the workshops, the SMTY blog hit $125,010 all on it’s own. Here’s the breakdown of where it all came from: 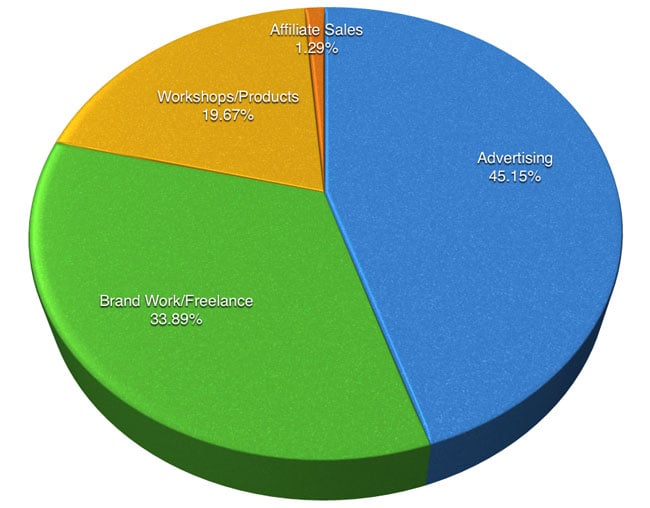 Overall we feel really good about that distribution of income. There’s obviously a minority wedge there we need to spend some time on in 2017, but I’ll talk about that in our report next month.

I may or may not have watched an episode of Austin Powers and just had a million on the head. This one was particularly lofty and we had high hopes even moving into December, but the year peaked at 704,000 pageviews in December. Still an awesome number and great result. We’re staring the 1M down in 2017!

That 704k pageviews can largely be attributed to consistent addition of content, 3-5 posts a week, marketing the blog (social media) and trying to constantly improve every aspect of what we’re doing. That improvement could be in photography, image process, shooting video, editing video, social media techniques, etc. and largely comes from a desire to continually be learning.

This was a close one that had Jennifer’s nails nibbled all the way down, but with 18 days left in December, we crossed the social reach 100k finish line. The final number rang in at 106k total reach, up 84k for the year!!!

We’ve got video, video, and video to thank for this goal which was big in 2016 and will be even bigger in 2017. If you’re not doing video yet, head to the SMTY Food Video Workshops to get started!

This one was tough to come to, because we were really going entirely blind into 2016. We did our small pre-launch in April and then opened the doors to the public in July. I’m excited to say that during that short period, we’ve welcomed 230 members to The Blog Village family and that has been growing exponentially since July which we couldn’t be more excited about!

Come join us in the greatest blogging community online!

We couldn’t be happier about how 2016 turned out and at the same time, we couldn’t be more tired! It was a ton of work, the end of the year was a beast to get through, but we hung in there and made each other laugh when it was the last thing we wanted to do 🙂 and we feel awesome about how everything turned out.

Thanks to everyone who stops by and checks out the blog, reads these reports and supports us in any way! It’s been a great year and we couldn’t have done it without awesome readers, an incredible blogging community, and YOU! Thank you 🙂

We’ll be talking all about the SMTY Digital Food Video Workshop launch next month as well as outlining our 2017 goals!

Thanks for hanging out and I’ll see you next month. If you want to spend a lot more quality time together [who wouldn’t? 😉 ] head over to The Blog Village, we’d love to have you!

As always, if you have any questions, leave a comment below. I answer every one!