This Slow Cooker Spanish Shrimp and Quinoa Recipe is a flavorful and super healthy one pot wonder! Throw all the ingredients into your crockpot and let it cook! Ridiculously easy and full of quinoa, shrimp, spinach, tomatoes, and spices like smoked paprika, onion powder, and more! 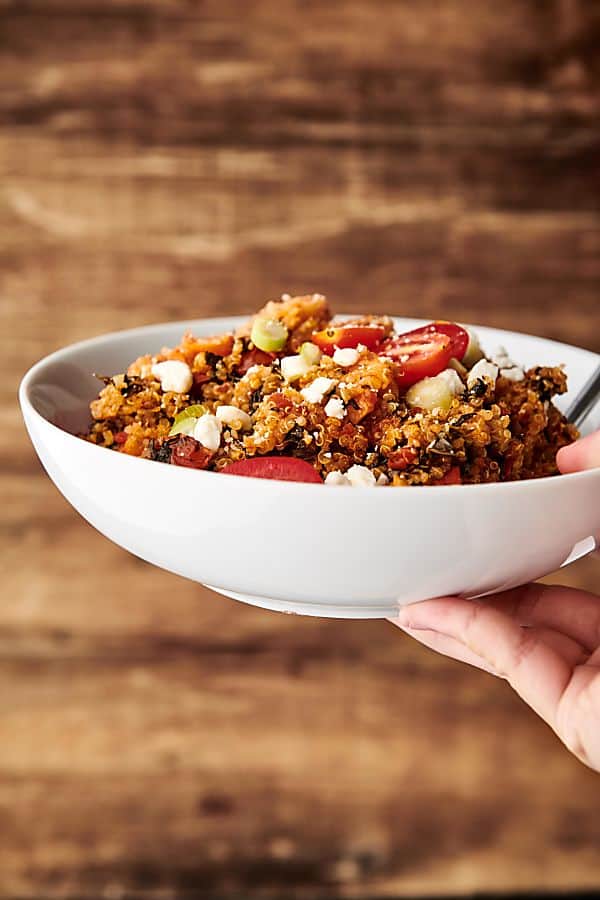 I’ve got a case of the Monday’s.

Trevor and I had SUCH a great weekend, which always makes it harder to go back to reality.

We took Teddy for walks, went to the pool, checked out a few new restaurants in downtown Raleigh, saw a movie (if you haven’t seen the newest Mission Impossible yet, doooooo it), and went driving on Sunday to check out all the cute neighborhoods Raleigh has to offer!

The only thing getting me through today?

Knowing that dinner is already done and waiting for me. Woot woot!

I KNOW you’re all with me.

Throw a bunch of stuff into your crockpot, set it, forget it, devour it! 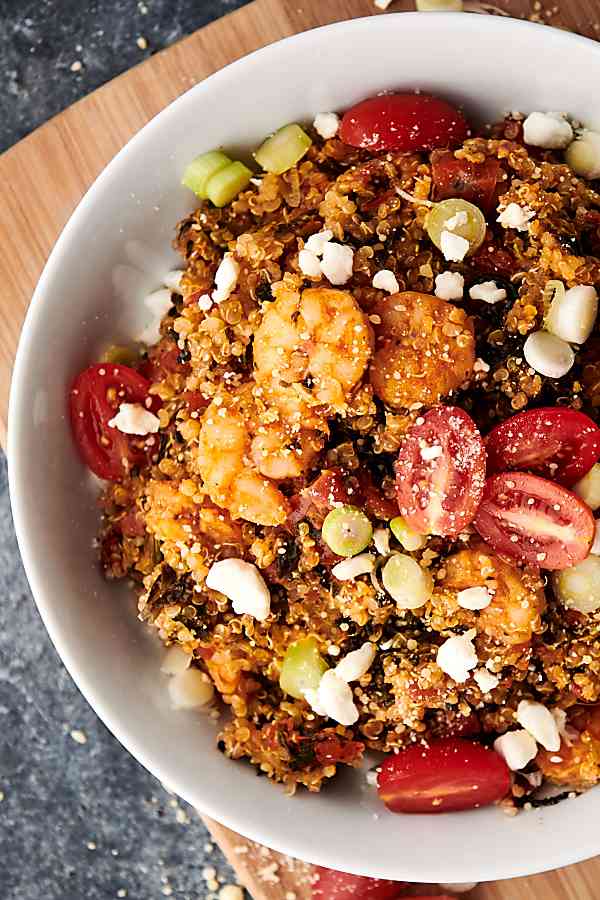 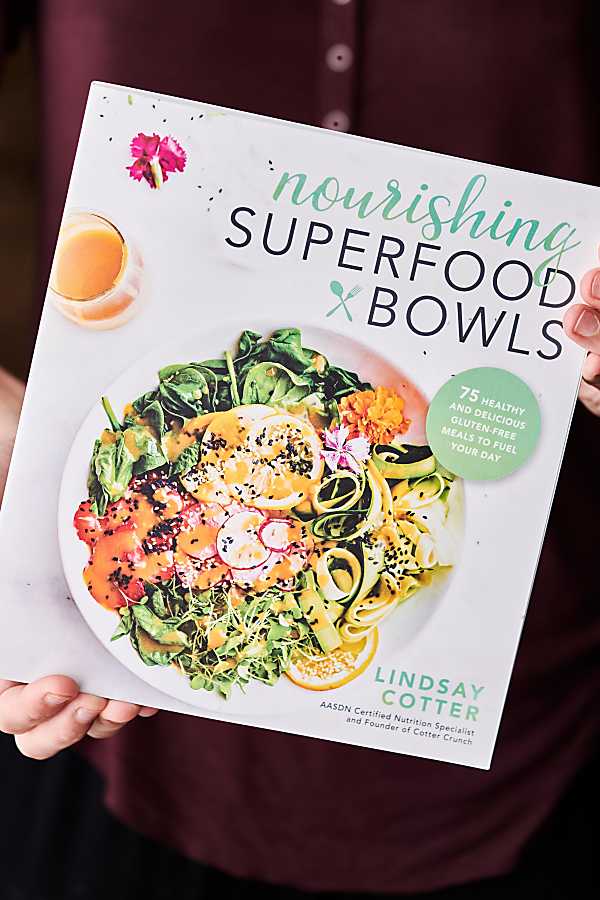 Today’s recipe is extra special, because it comes from my friend Lindsay’s (from the blog Cotter Crunch) new cookbook, Nourishing Superfood Bowls: 75 Healthy and Delicious Gluten-Free Meals to Fuel Your Day.

Not only is the book absolutely GORGEOUS – she takes the most amazing photos – it’s full of easy, healthy, and super yummy bowl recipes.

I had a really hard time deciding which recipe to share with you, because they’re all so colorful and sound so tasty, but once I saw slow cooker spanish and shrimp quinoa, I KNEW that’s exactly what I needed to share with you all today.

How do you make shrimp in your slow cooker?

I’ve had that question in my mind for SUCH a long time. I don’t know why, but I’ve always been so scared to make shrimp in my crockpot.

But let me tell you.

Take frozen shrimp, throw into the crockpot with all the other ingredients, and it’s perfectly cooked in just about 2 hours!

Because it cooks along with spices and broth, it’s not only perfectly cooked, but perfectly seasoned, too!

What ingredients are in slow cooker spanish and shrimp quinoa?

So, how do you make Slow Cooker Spanish Shrimp and Quinoa?

Literally throw all those ingredients (minus green onion, goat cheese, herbs, and salt/pepper) into your slow cooker and let it cook for 2 – 4 hours.

Taste and season with salt and pepper, then serve with a generous sprinkle of green onions, goat cheese, and fresh herbs of choice.

Whatever you do, don’t skimp on the goat cheese, it’s SO tangy and the perfect compliment to the smokey paprika and fire roasted tomatoes.

I can’t believe it’s taken me this long to cook shrimp in the crockpot . . . I am absolutely OBSESSED.

This one pot wonder might just be the easiest recipe on Show Me the Yummy, yet! 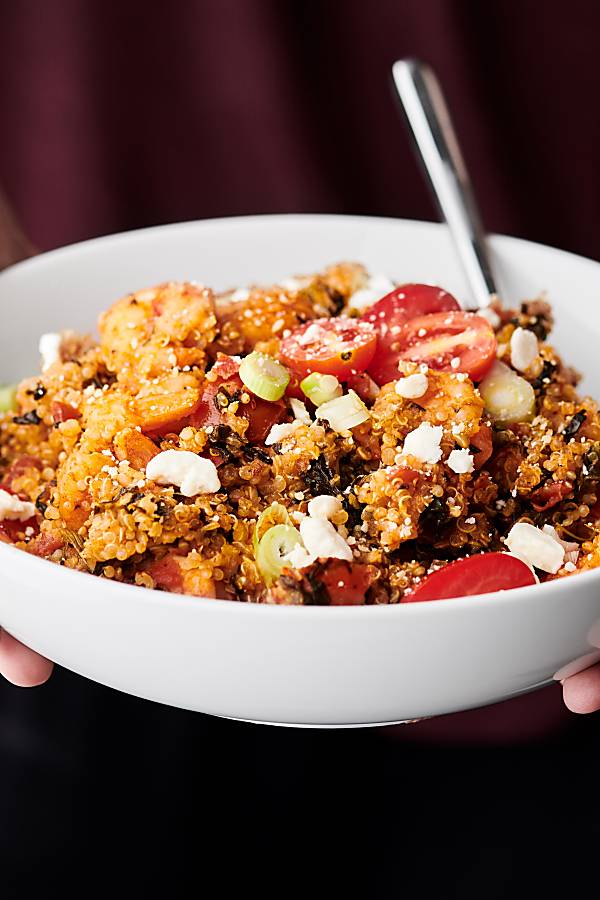 Slow cooker spanish and shrimp quinoa for the win!

Do you want more shrimp (or seafood) slow cooker recipes? Show Me the Yummy! 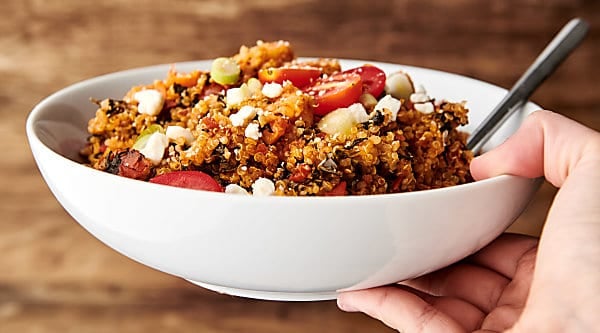 Nutritional information does not include goat cheese.  Recipe reprinted with permission from: Nourishing Superfood Bowls: 75 Healthy and Delicious Gluten-Free Meals to Fuel Your Day. 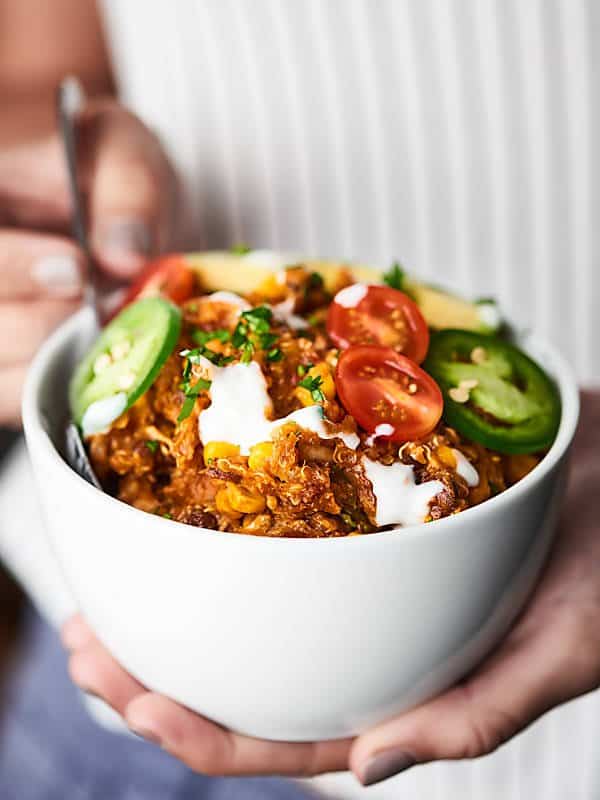 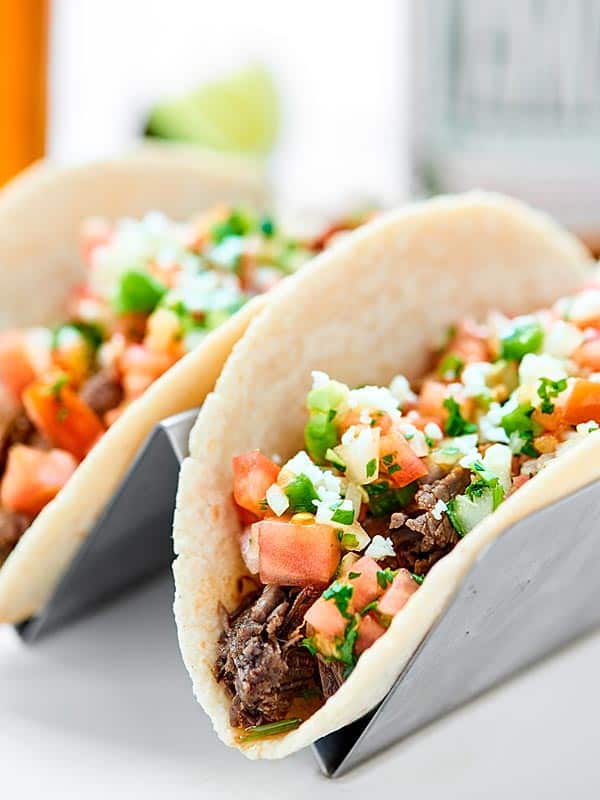 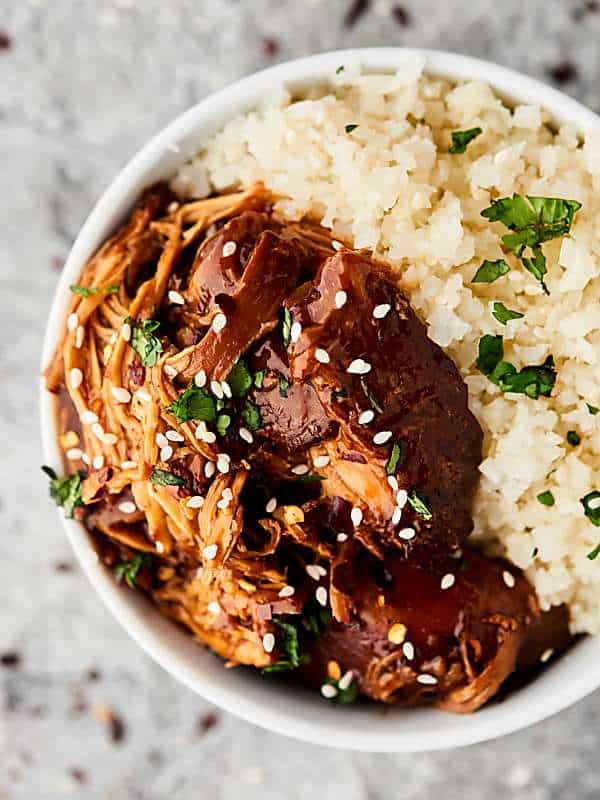 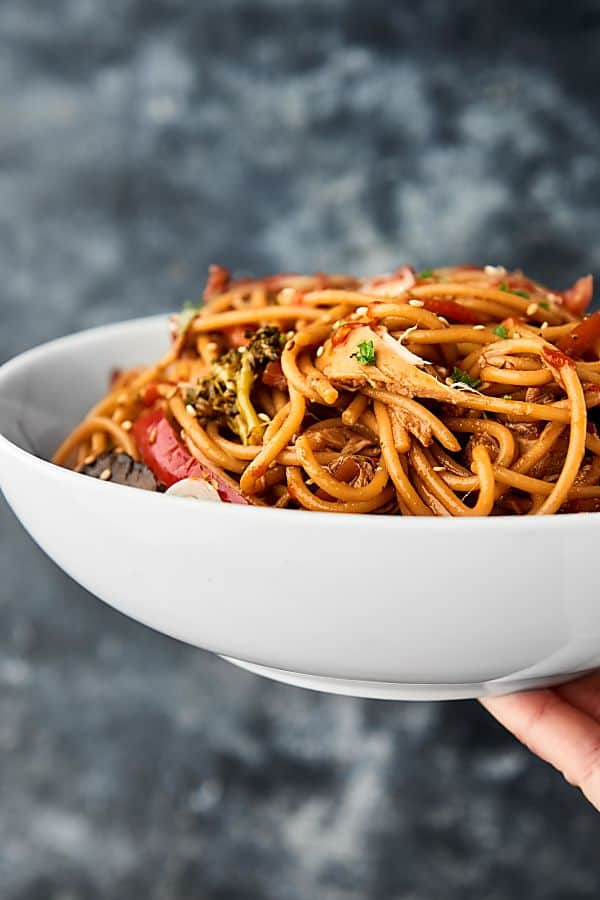 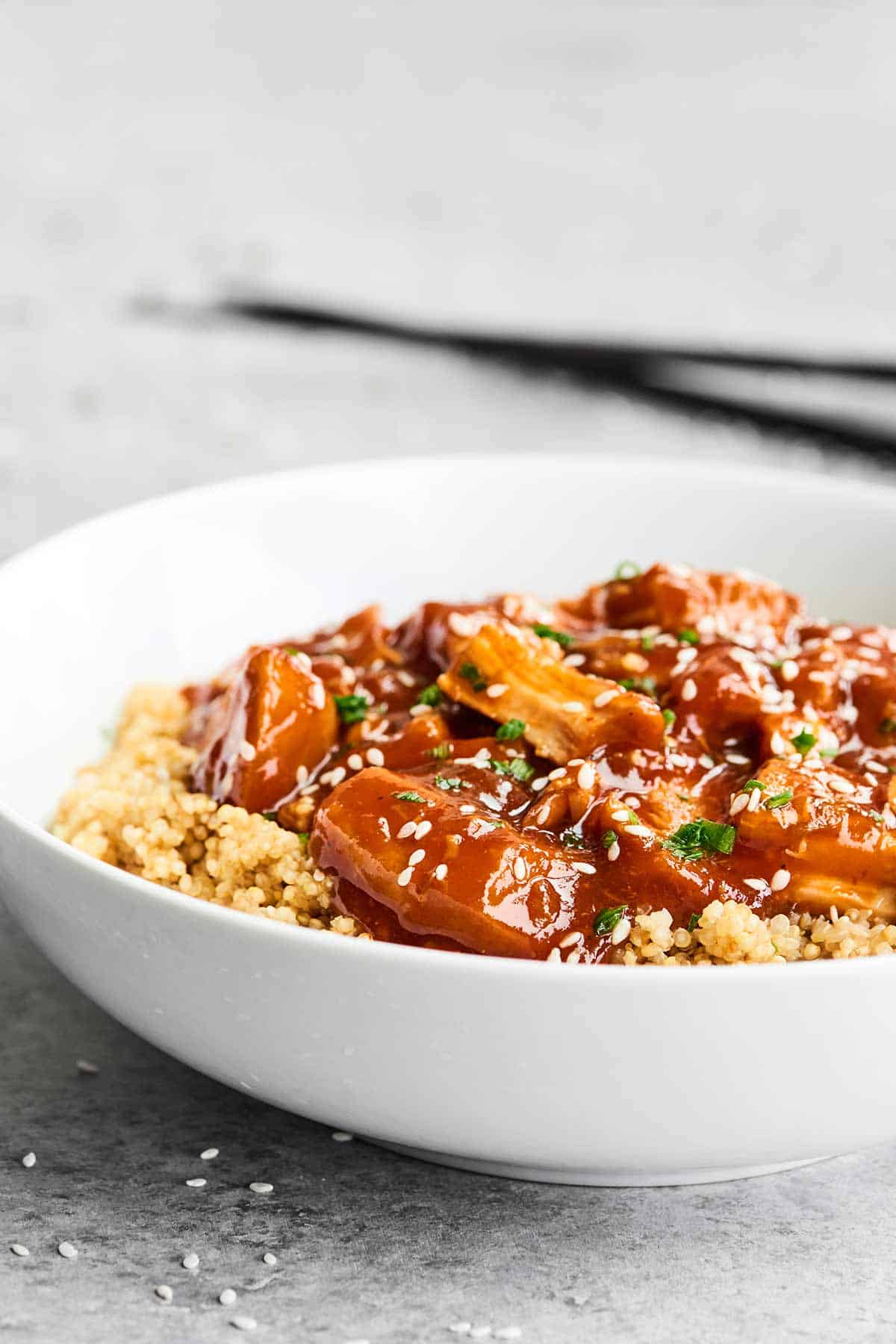 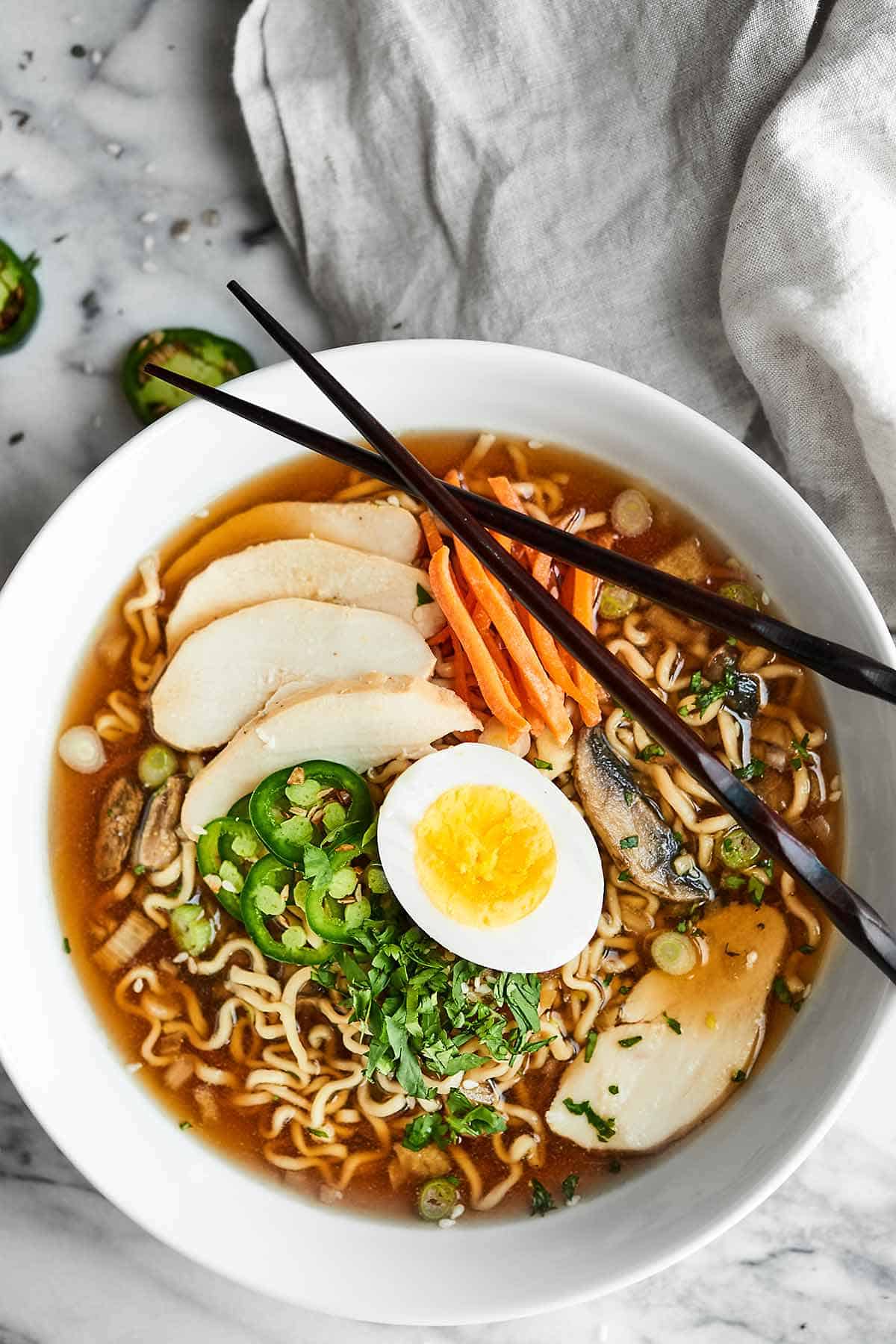