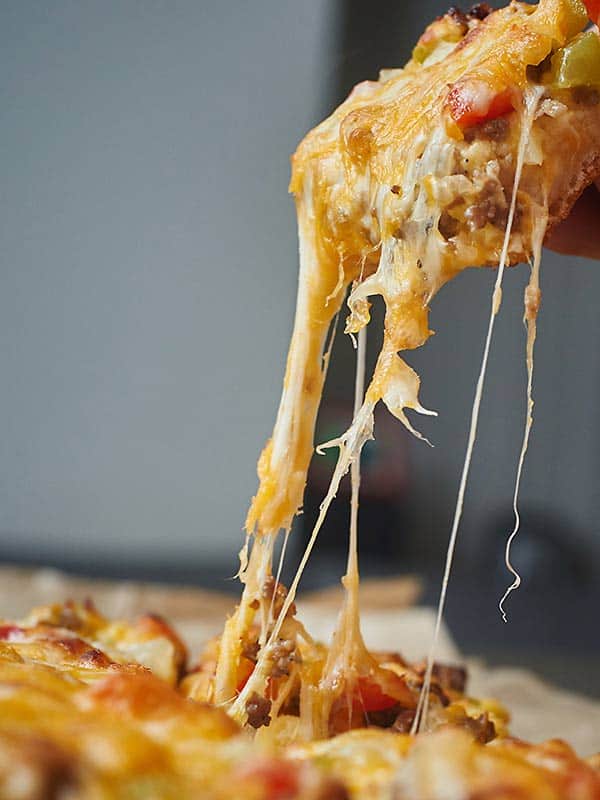 You know that saying “If it’s too good to be true, then it probably is”? Like those not so great shirataki noodles, the low carb, low calorie, that are supposed to “taste just like a noodle!” that’s made with tofu? Yea. Definitely too good to be true. I was so excited that I could have pasta whenever I wanted without all the guilt. Next time, I’ll just suck it up and take the guilt… I had to spit them out, because I chewed on a noodle for like a minute, and it still wasn’t going anywhere.

Pizza for breakfast that’s actually a breakfast food on the other hand, is NOT too good to be true.

Some people love having breakfast for dinner. Not me. I like having dinner for breakfast and this breakfast pizza definitely fits the bill! Let me repeat that for those of you who are reading too fast… You get to have pizza for breakfast, but instead of having that cold leftover pizza, have this one fresh out of the oven instead! I use a pre-made crust and top it with creamy scrambled eggs, breakfast sausage, peppers and onions, and two different kinds of cheese. BOOM!  What was that you ask?  That was your mind being blown. Are you ready to have pizza for breakfast? 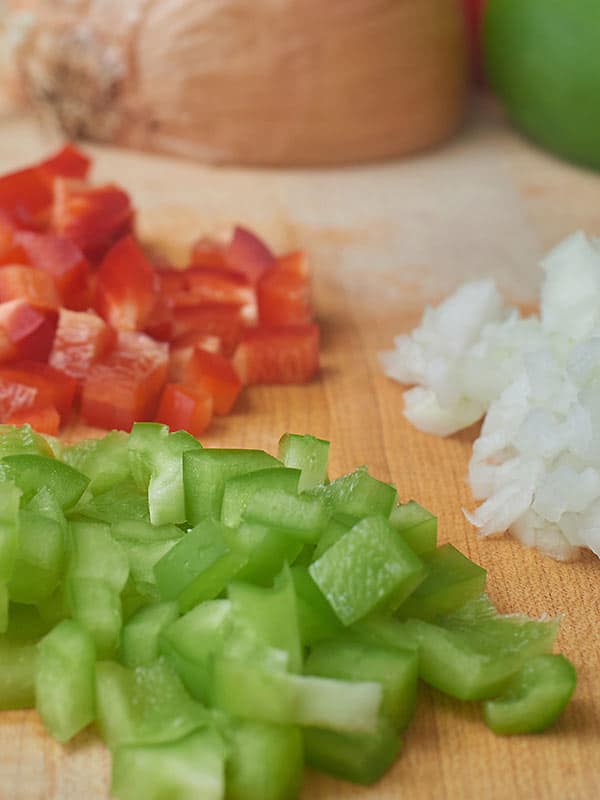 I talk about Cedar Rapids, Iowa a lot, but it’s hard not to when it’s the place I grew up and I’m reeeally missing their food lately. Like the breakfast pizza from Parlor City. Trevor and I would literally wake up every Saturday morning, hardly change out of our pajamas, and  race a block to Parlor City and order the breakfast pizza with sausage.

It’s crazy to me that some people have never experienced breakfast pizza before! It’s probably very similar to when someone walked in and said, “Hey, check out this round thing that rolls… I call it a wheel”, that’s what breakfast pizza is going to do to your world.  It must be a midwest thing, because everyone I talk to in Seattle looks at me like I’m crazy and I can’t find a place that serves it anywhere! So, I searched the interweb until I found the perfect breakfast pizza recipe. Let me tell you, it was NOT an easy task. Cracking an egg on pizza crust and adding pancetta is not breakfast pizza!

This breakfast pizza is the real deal. Try it this weekend and go ahead and have yourself a mimosa while this is baking in the oven. Weekend, pizza, mimosas, permission granted.  You’re welcome 🙂 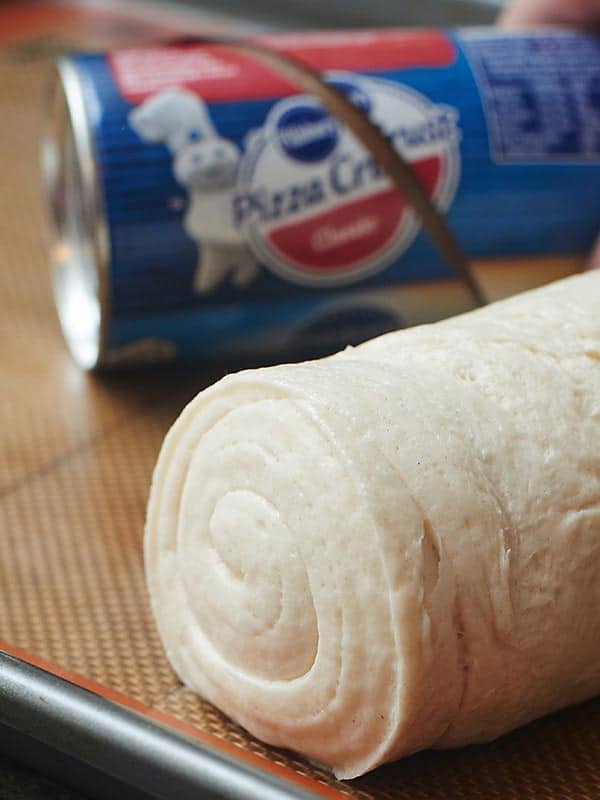 Usually when I’m making pizza, I love making my own dough, but when it’s early on a Saturday morning, Trevor and I are starving, and we don’t feel like making our own dough, because we’d rather be sipping on that mimosa while watching Shark Tank. Our personal favorite is Pillsbury Pizza Dough. I actually love how buttery and flakey this crust is. It goes perfectly with all the other ingredients, but feel free to use whatever pizza dough you like.

You’re going to start by preheating your oven and prebaking your pizza crust according to the directions on the tube (it takes me 6 minutes).

While this is prebaking, brown your meat in a saute pan over medium heat and cook until no pink remains. 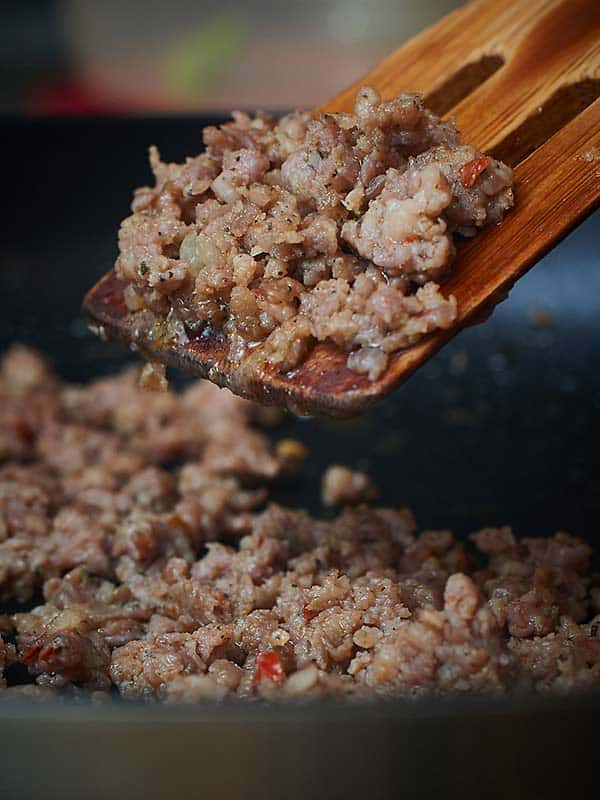 Remove your sausage from the pan and set aside in a bowl.

Next you’re going to take diced bell peppers and onions and saute those in the same pan in a touch of butter. Cook these until the peppers are softened, but still have a little bit of a crunch. Make sure to season these with plenty of salt! You don’t want raw bland peppers, but you also don’t want them completely soggy, as I think they add nice texture to the pizza! 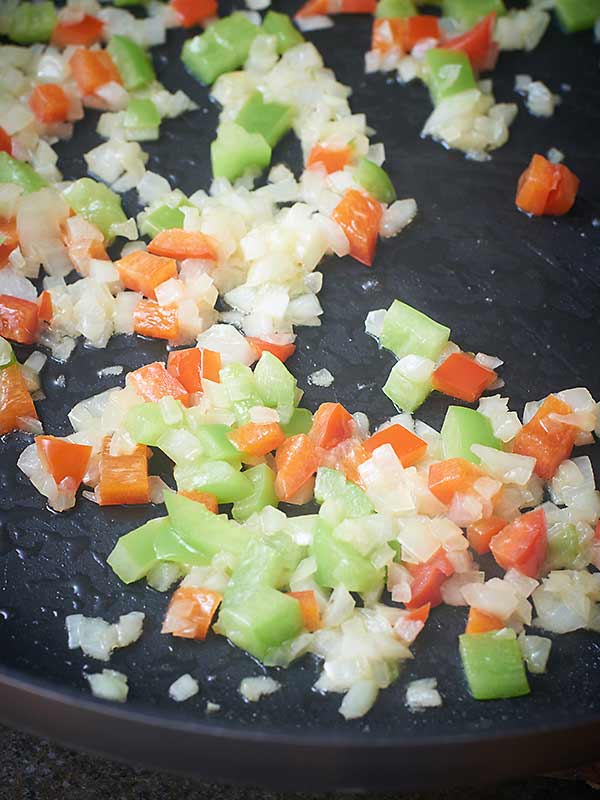 Once the peppers and onions are cooked, remove from the pan and set aside in another bowl.

Now you’re going to add butter and flour to the pan over medium heat to make a roux.

A roux is just a mixture of fat (the butter) and flour to use as a thickening agent to make a sauce. Use a spatula to stir the butter constantly as it melts with the flour. You’ll cook this for about four minutes. Don’t go too crazy with the heat, you don’t want to burn the butter… better to warm it up gradually.

Remove this from the heat while you whisk in a cup of milk. I used skim milk, because that’s what we always have on hand and to save on some of the calories, however, feel free to use anything from skim – half and half. 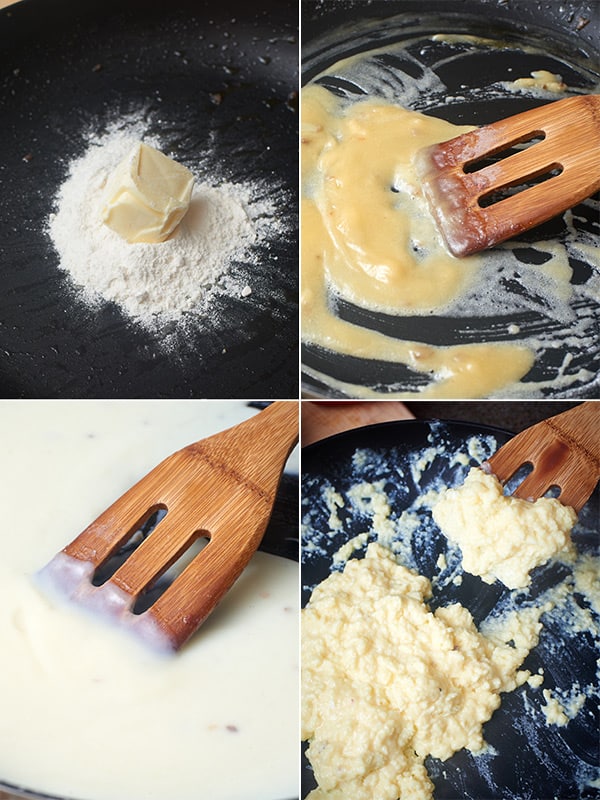 Place this back on the heat and cook until the sauce begins to thicken. The sauce should stick pretty well to the back of the spatula and should be about the consistency of a thick pudding.

Then you’re going to stir in some whisked eggs and cook until they are soft, but not runny. Do NOT over cook them, or they will get rubbery. You’ll know when they’re done, because there won’t be any extra liquid from the eggs in the pan. Season with salt to taste.

Spread the egg mixture evenly over the pre-baked dough, then sprinkle on the cooked sausage.

Next, top the sausage with the peppers and onions. 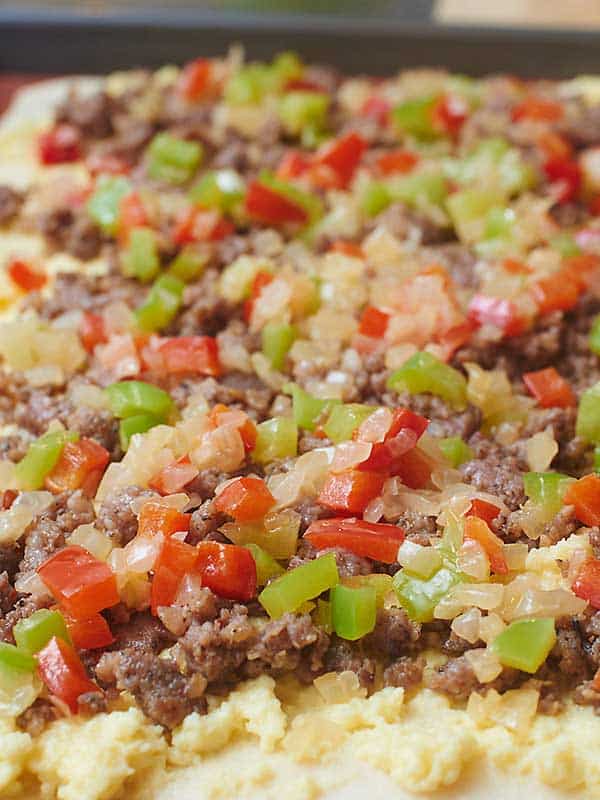 Lastly, you’re going to top the pizza with shredded mozzarella and cheddar cheese. 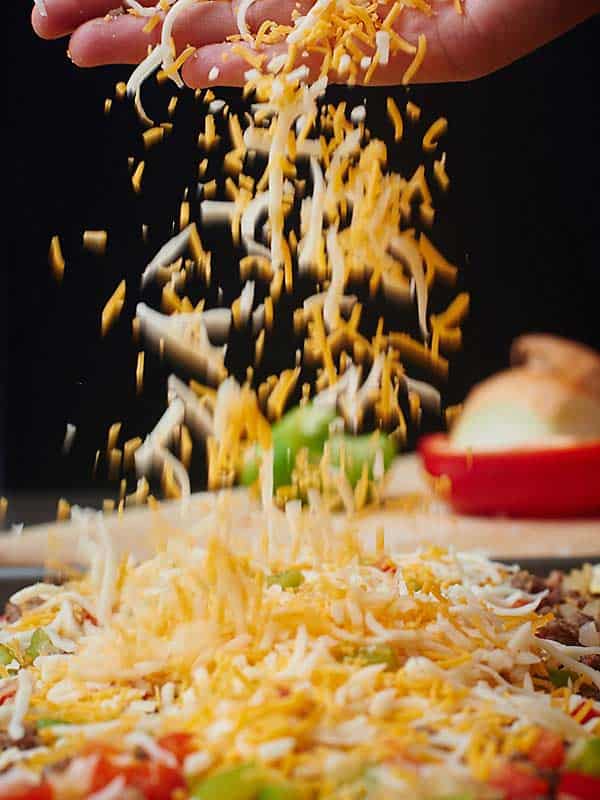 Bake this in the 400 degree F preheated oven and cook for about 15 minutes.

Here’s a little secret from Trevor: To give the cheese that nice golden brown color, flip on the broiler after you’ve cooked the pizza for 15 minutes and broil for a minute or two or until the cheese is melty and lightly browned. Make sure you watch the entire time, as the cheese may burn if it’s broiled for too long! 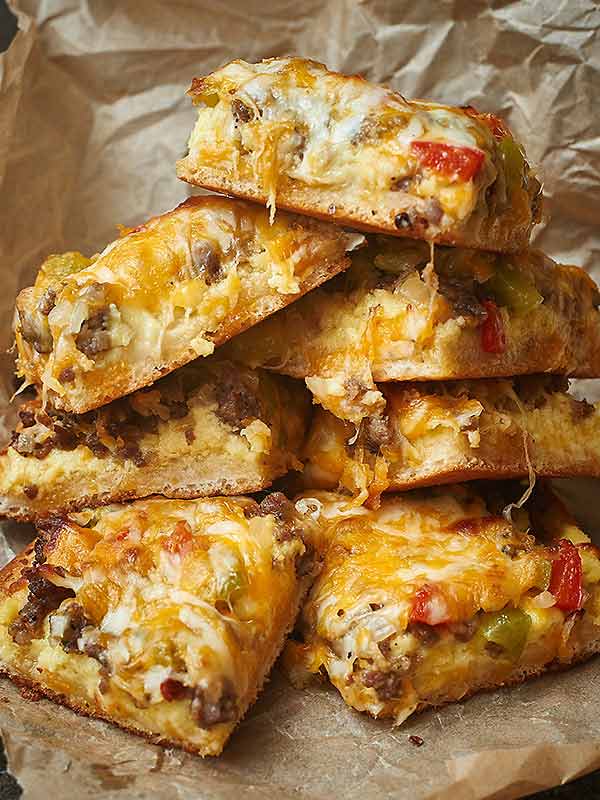 Have you ever had breakfast pizza? Show me the yummy! 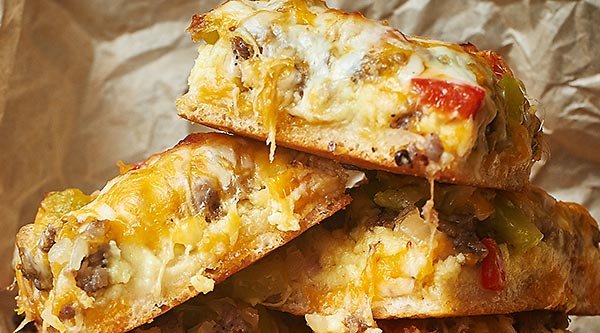 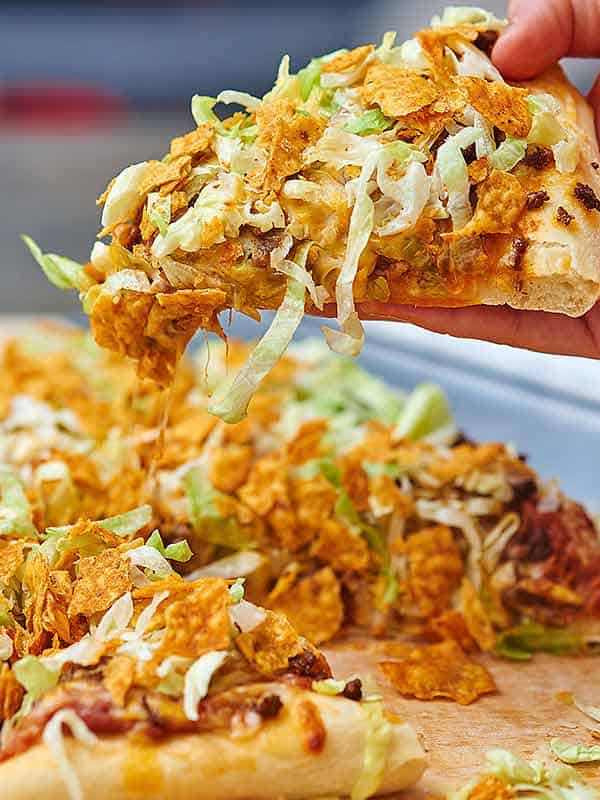 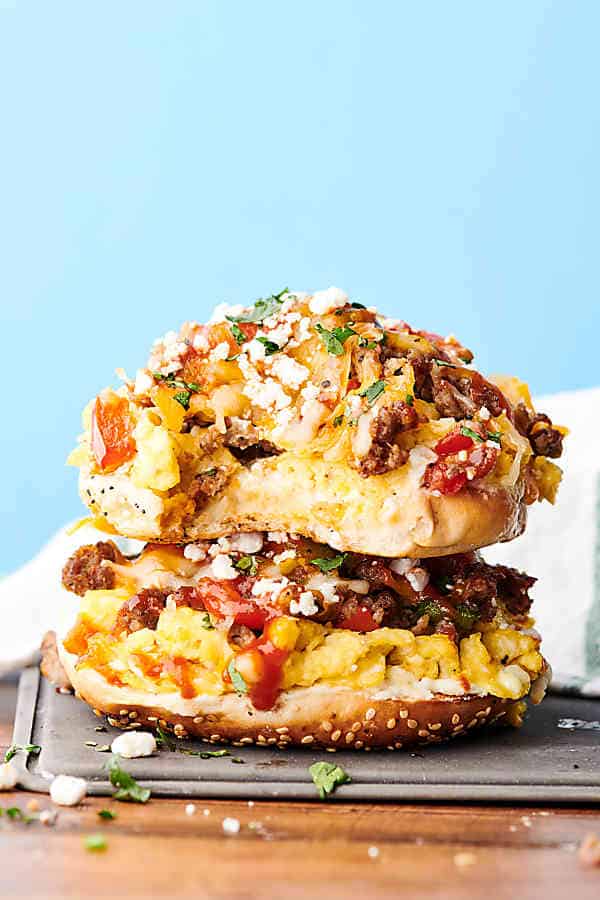 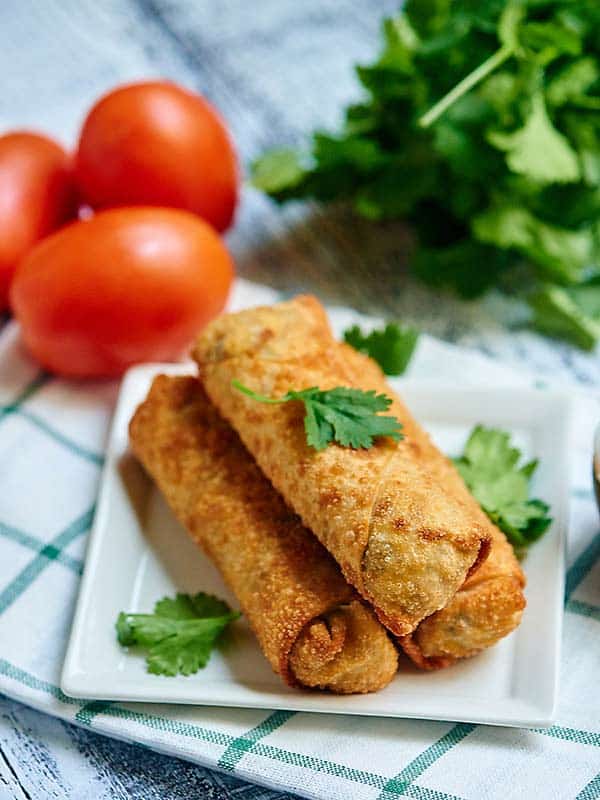 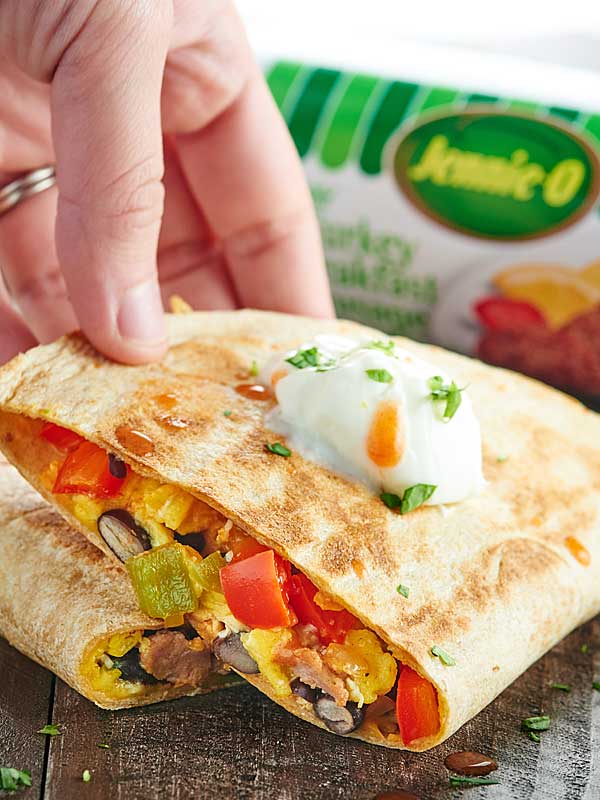 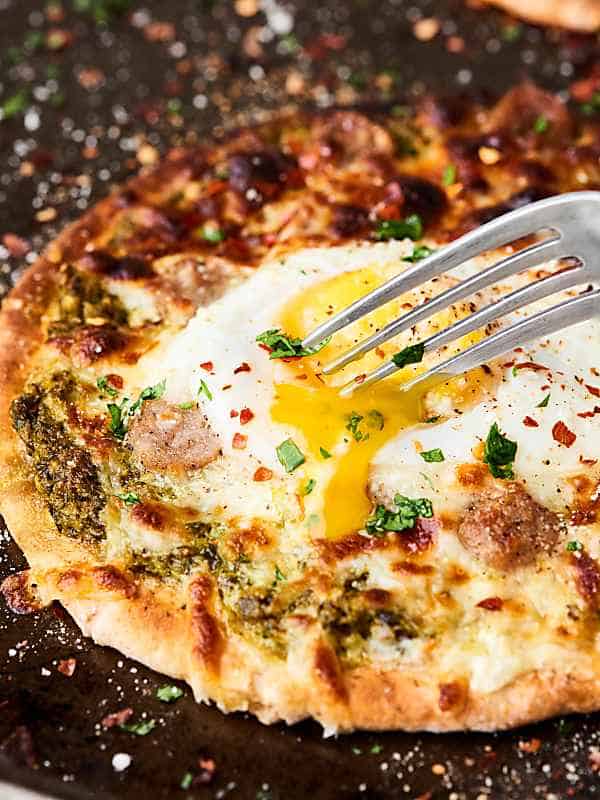 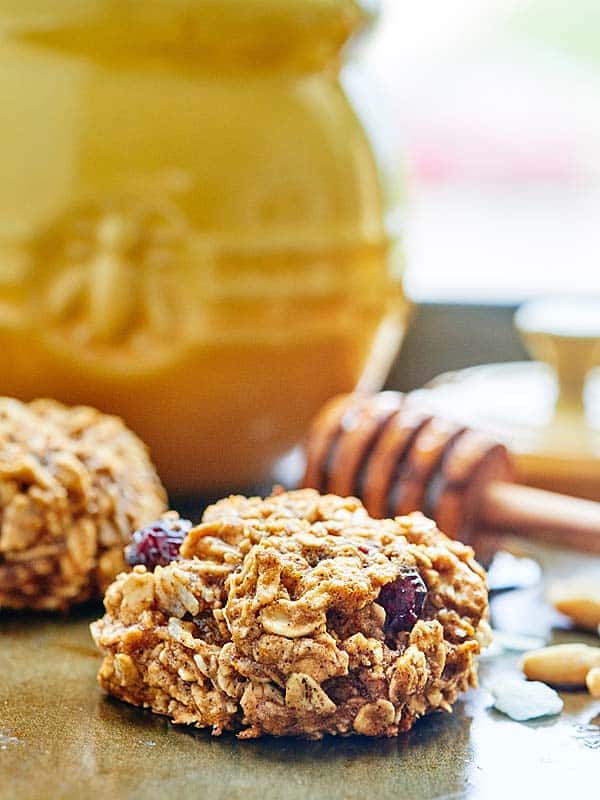